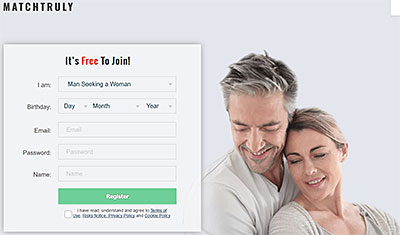 If you're one of those guys who thinks that you can find a girlfriend or maybe even a wife halfway across the world in the Ukraine using websites like MatchTruly.com then you're going to want to read our extensive review. In this review we joined Match Truly to see what the site was all about. Specifically we wanted to know if it's legit or if it is a fraudulent scam. We've done many reviews and all types of different Ukrainian what we call "mail order bride websites" and after all our investigations we can't really say anything positive about any of them. All of them failed miserably.  If you want to know if MatchTruly is a good place to meet real Ukrainian women read the full review below

Did You Read The "Risks Notice" Page?

The Risks Notice page link can be found when you first created your account on the homepage of the website. You can see the screenshot below.

(A screenshot of where to find the Risks Notice page.)

The women on the website are not who you think they are. Something they mentioned in the Risks Notice page is that the female members that you communicate with could very well be getting paid to write messages back and forth with you. They say that they may be getting a share of the money you spend when you communicate with that validated member. So the problem here is that it's in their best interest to get you to spend as much of your money as possible because they receive a cut of all of the income coming in.

To make it completely clear the female dating profiles that you interact with in this website and the people who operate them are paid to chat with you. This is nothing more than a job to them. You might be looking for the love of your life, but they're just looking for their next paycheck, which is you!

If you take a look at the screenshot shown below circled in red you'll see just some of the female profiles on this website. Almost every single female on this website is beautiful. They all look like models! And the really crazy thing is they have absolutely no qualms and could care less what you look like. We've done many reviews on different Ukrainian mail order bride sites, it doesn't matter which site we've joined it's always the same thing. We start getting tons of messages. It's like the Ukrainian women are so desperate to leave their country they will do absolutely anything OR is there something more sinister going on here? Since we've already discussed the Risks Notice page  you now know that these dating profiles are what the website calls 'Validated Members". These are dating profiles purchased from a supplier in the Ukraine.  If you interact with any of these profiles they make a lot of money off of you. We've read on different review sites that the females are paid to take model shoots. That's why you see so many attractive looking women on MatchTruly. They are paid for the use of their photographs. In the end it's our honest belief that you can never really meet up with these women, you can never have any type of relationship and you will never, ever marry them! All of this is very misleading. Most men have some vision in their mind when they join these websites thinking somehow they're going to sweep these women off their feet and live happily ever after with them. This is the farthest thing from the truth. All you're doing is draining your bank account!

(A screenshot all of the profiles on Match Truly.)

The terms and conditions page talk about something called "Icebreaker" messages. These are automated messages that are sent from the validated member profiles. Remember a validated member profile is a profile that has been purchased. We highly doubt that validated members are real women looking for real relationships. These are profiles that have been created exclusively so you can exchange messages with, the end result is the company makes money every time you exchange a message with these profiles. Icebreaker messages include the sending of letters as well as chat messages to you. In the terms and conditions page they state that these profiles are able to send automated messages to more than one person at the same time (multiple people at once). You may think that you are having a personal conversation with a female but chances are that the person operating that dating profile is sending the same message to multiple men at the same time. It's a form of mass messaging where they can send messages automatically to large amounts of male members on the website at the same time.

Over 99 Messages While Being On The Site For Under 3 Hours!

Below we've included a screenshot showing that we've received over 99 different emails. These are the Icebreaker messages that we were talking about. The reason we're getting so many emails is because the website makes money every time we were reply to any of these emails. For the record we didn't reply to any emails but if we did reply to all of the 99 emails it would cost us hundreds of dollars!

( A screenshot of the 99 different messages that we received.)

In our opinion all of these Ukrainian mail order bride websites are pure garbage. They are nothing more than money making operations that offer little value to the end user being you. In the terms and conditions page they admit to sharing revenue with the people behind These profiles. They also admit that they purchased female profiles from providers. On top of that they also confess to sending people automated messages. And lastly they also admit that their are profiles which are maintained and operated by their own employees. You can read the most important parts of the terms and conditions page below or click on this link to be taken directly to the terms page and read it on their website.

MatchTruly.com is the same as Valentime.com, Charmerly.com, VictoriaHearts.com, and LoveSwans.com, they are all the same. None of them can be trusted.