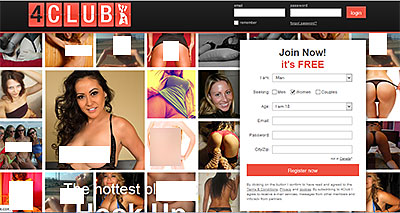 As a general rule if you start receiving chat requests and instant messages from local women right after you have signed up to a dating service then you know that the site is going to be a scam. This same scenario has played itself time and time again, review after review, exposing scam after scam. 4Club.com is no different it is running the same scam. They are using automated software programs to send free members such as us fake instant messages and fake chat requests in the hopes that we try to reply back to the fake women in those chat requests. As soon as you agree to the chat request you get sent to the upgrade subscription page. This is how they make their money and they make millions of dollars deceiving gullible men into pulling out their credit card and purchasing a monthly subscription to their sham dating site. For the record there are no girls sending you instant message requests, it's all a con which rips off thousands of people every single month. We already received 2 chat requests (see evidence below).

The Evidence In Black And White

Below are just two profiles that we are showing you as evidence. there are countless other fake dating profiles on the site,  but listen to them I would fill up the whole page. We  how was your show you two examples of the fictitious profiles on this site. But be forewarned over 90 of the female profiles on this side are in fact faked. As a rule of thumb if the images in the profiles you are viewing of our house attractive looking women who are new door in bikinis or so for this is usually a telltale sign thats that profile is probably going to be fake and the images have been stolen somewhere off of one adult image sharing forum.

You're probably wondering why a dating site would create fake profiles? The reason is that this site and many other sham dating sites need female members in order to fill the supply of male members registering on the site. The truth be told is that there are always more men than women on any dating site. Fraudulent dating sites such as this one go to the extent of creating their own female members, which are of course completely fictitious. This is the make up for the lack of real women on it, so the staff of the dating service creates their own profiles. And of course if you do try to communicate to these fictitious women who you believe to be real, you have to purchase a monthly subscription and this is why they create the false profiles in the first place.

(the same fake profile image was found on numerous adult image sites this was just one of them.)

The image above can be found on numerous sites such as:

We were contacted immediately from fake women after registering on the site with a free account. If you have an account on 4Club.com wer'e sure you have experienced the exact same thing. And the fake profiles being copied and stolen from adult image sites is another part of the scam that we have exposed. You should avoid this site like the plague, your chances of actually meeting someone in person from this site are less than 5% based on what we have seen.