If you read our review of Fish4Hoes.com you know that Fish4Hoes is nothing but a marketing gimmick. Using social media the marketers behind this website along with GetYourHoe.com use fake screenshots and fake news reports that make it seem like Get Your Hoe is a popular hookup site to meet girls who want to have sex with you. It grabs your attention because of the catchy headlines as well as a screenshots of fake text messages. It’s not a legitimate dating site and the whole premise behind the site is to make you join it so they can scam you.

The First Part Of Their Scam

The first part of their scam is via social media. By using fake screenshots of people texting each other as well as fake CNN news reports these memes and images go viral on social media sites like Facebook, Twitter, and Reddit. People actually think the screenshots like the ones that you see below are actually real. The screenshots grab your attention because they’re so shocking. For instance the fake CNN news article that says “Married Teacher Arrested For Giving BJ To 17 Year Old Guy She Met On Hookup Site GetYourHoe.com”. This is a clever gimmick because it’s a shocking headline, but at the same time what they’re doing here is advertising their website! They know that a certain amount of people will go visit the website just because of curiosity. People will type GetYourHoe.com into their web browser,  and they are well on their way to getting duped into joining a phony dating site called HushLove.com.

Below you will see the fake news article screenshot that supposedly from CNN news, which is totally false. CNN never wrote an article about a married teacher meeting a seventeen-year-old on GetYourHoe. 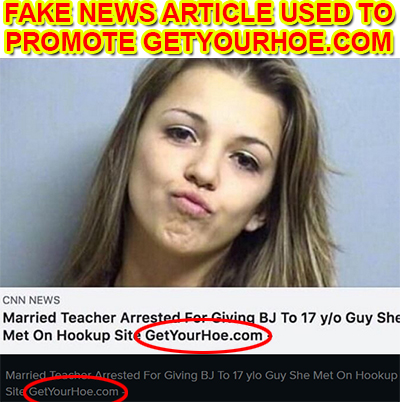 (Screenshot of a fake CNN article that actually promotes the fake dating website.)

Below is a fake text message that has gone viral all over social media. This text message never happened, it’s not real and it’s just a sneaky way of promoting this website. 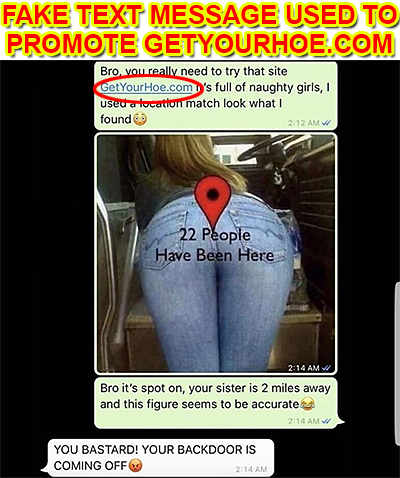 (Screenshot of a fake text message that also is promoting the website.)

Here is another fake text message screenshot that has gone viral all over social media. All this is is free exposure for the site. People think this is a real text message so they share it all over Facebook, all over Twitter excetera making this phony meme go viral! Then people start visiting the website thinking it’s a real site to hookup with girls.

We’ve already done an extensive investigation into Hush Love and have concluded it to be a fraud and a full-fledged scam. This is not a legitimate dating service, this website has been created for one reason and that’s the trick you into upgrading so they can make  money from you.

They also confessed that they use computer bots systems to send people phony email messages that look legitimate. The emails are fake and when you try to reply to them you can’t unless you purchase an upgraded membership.

A Recap Of The Fraud

To recap how the scam works. First you’ll see a Facebook post about GetYourHoe.com. Then you as a curious web user would type GetYourHoe.com into your web browser at which time you would automatically be redirected to Hush Love. From there if you actually want to communicate with the fake profiles on the website (that you think are real women) you need to purchase a membership. And that is the con in a nutshell. It’s very clever, very elaborate but still very much a fraud.

Unfortunately GetYourHoe.com just like its predecessor Fish4Hoes.com are both using the same deceptive tricks and marketing gimmicks to attract viral attention from web users. As we’ve already stated this is in fact a scam using fakes text messages and phony CNN news reports to grab your attention. Don’t fall for it, now you know the truth.

If you want to find real women, then look at these legit dating websites.