MyDates.com is the site that we’re investigating in this review that we did. We had our suspicions about this website and we wanted to see if we were right. So what we did was we joined the website, created an account, logged into the members area and we documented everything. Documenting everything means finding any evidence of fraud and deception and then taking screenshots of that evidence and including it in the report. You can read the findings of our investigation below.

Whenever you join a dating site the first thing you need to do is create a dating profile. This is where you upload a photograph of yourself, where you put your location, your age, your interests and so on. But every time we do one of these investigations we never upload any photographs, and we never fill out any of the personal information which is all done on purpose! You can take a look at the screenshot of the dating profile we used for this review. Circled in red you will see that we have not uploaded a single photograph. You might be asking why wouldn’t we upload any photos. The answer is that we want to see if we would still received emails and messages with an empty profile. It would be reasonable to assume that if you don’t put any photographs in your profile and you don’t have any information about yourself then why would anyone want to contact you? But, on fictitious dating sites (like MyDates) it doesn’t matter if you fill out any personal information because you will still receive messages. Please continue reading the rest of this investigation below to find out what we uncovered. 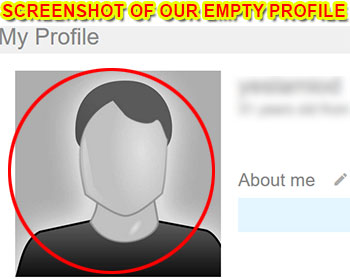 (Screenshot of the empty profile..)

We were just discussing why would any women want to contact a man who didn’t have any photographs in his profile and guess what we still got barraged with chat message after chat message. This wasn’t just one or two messages but 61 messages. You need to ask yourself why is it that so many different women would contact a guy with who doesn’t have a single photograph on his profile. It’s not logical, and it makes absolutely no sense at all.

For the record we’ve done hundreds and hundreds of reviews of hookup sites so we have quite a bit of experience dealing with phony dating services. The number one method they use to lure you into purchasing credits or buying a monthly membership is to inundate you with large amounts of messages. Tricking you into believing you’re being contacted by a host of horny women looking for casual sex. But of course it’s all about money. They trick you into believing you’re getting real messages all you need to do is buy credits and you can chat with the women and hookup with them. But all of this is one big massive scam, to make as much money off of you as possible.   There are no women sending us messages it’s all a facade. This website along with thousands of others use high-tech artificial intelligent chatbots that are designed to simulate what a real web user would send you in a chat message. The 61 chat messages we received are not real, they’re fake and used to get us to purchase credits that’s the bottom line!

(Screenshot of 61 phony chat messages that we received.)

72 different girls apparently visited our dating profile on this bogus hookup site. But was it really 72 women or just a disguise to make it look like 72 women checked out our profile. Once again it’s the fake chatbots that are trying to mislead you into purchasing credits. There are no 72 women checking out our profile. What is there to check out on ou profile? There’s no pictures, and we never put any personal information so why exactly would 72 different women want to view our dating profile. The answer is no women visited the profile.

(Screenshot of the 72 fake views that we received.)

We Have Evidence That This Site Pays People To Scam You

In section 11E of the terms and conditions page it states that Boranu (the company that owns and operates MyDates) uses professional operators for the entertainment of the users. And it goes onto say that “real meanings are not possible with these operators users can only send them messages”. So what they’re trying to tell us here is if they hire people who operate profiles on the website and it’s not possible to have a real life meeting with these paid operators. All you can do is send messages to them on My Dates. Essentially meaning that they’re using fake dating profiles to rip you off.

Hopefully you found this a review useful. It proved that this website is in fact a fraud. This is not a legitimate dating service where you can find real women for casual encounters, it’s just a money grab created to trick you into paying for expensive credits that are completely worthless! Spread the word.

😡 #MyDates.com Is For Suckers, It’s All A Scam & You Are The Target!
Read The Review Here: https://t.co/N5wFQFqYoY pic.twitter.com/hu69tlQZsz

👉 If you want to find real women, then look at these legit dating websites.

Other Sites To Be Aware Of: