Nothing Seems To Change The Scams Stay The Same

It seems that any dating sites that spring up that are owned by Global Personals seems to be a scam. Unfortunately this site doesn't seem any different than other sites that I have reviewed from Global Personals, it's the same scenario over and over again. Nothing really changes except for the look and feel of the site, but the fake emails and phony instant messages remain the same.

We find it very disturbing that even when our dating profile is completely empty and has no photographs and no information we still  receive messages from women interested in hooking up. Unfortunately this is one of the telltale signs that a website is using automated computer software programs to send you chat and instant message requests. Unfortunately most people won't realize that they are getting instant messages from people who are not real, so they will be more than willing to upgrade to communicate back to these fake women.

How about works is relatively simple to understand. You sign up on a dating site as a member, then you start receiving emails and instant messages from various local women. Then when you try to reply back to the messages you are asked to upgrade. People who don't realize this is a scam are very easily taken in because they are more than willing to pay a monthly membership fee in order to communicate with the fake women who contacted them. Not knowing that the whole thing is a complete scam  they give their credit card info and they just lost $35.

Below are just 2 fake messages that we received that were used to try and trick us into upgrading to a paid subscription.

If you take a look at the attractive blonde lady circled in yellow (who is supposedly a member of HotFlings.com), you will find the same exact photograph on a model site called ModelMayhem.com. Using reverse image search we were able to identify the exact location of where the photograph was used on the model site. So what's basically happening is that someone has copied the image of  the female model from ModelMayhem,com and then used it to create a dating profile. Chances are the people behind the profile creation are probably going to be the owners of the site. We have exposed and caught many dating services using fake dating profiles to make it appear as if the site is full of local women when the truth is most of them are actually stolen  images. The profiles look real, complete with age, location, likes, dislikes and everything else you would find in a dating profile. That same image can be found here on ModelMayhem.com.

(this image was found on a model site and then used to create a fake profile on HotFlings.com) 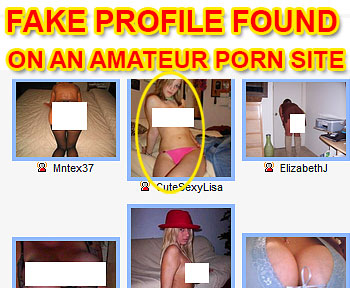 (the image circled in yellow is used on a fake profile and can be found on another site right here, which is an amateur adult site.)

If you like fake profiles and automated computer bots sending you phony messages you will love this site. If you want to meet real girls then HotFlings.com isn't for you.