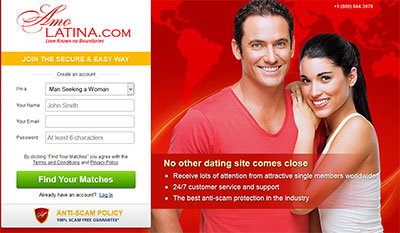 We have done a few reviews of mail order bride services. All those reviews came to the same conclusion that these sites were basically no more than a system of tricking you into purchasing credits in order to email back what could be interested women but they could also be just paid employees that are used to trick you into purchasing even more credits. Our unbiased review of AmoLatina.com is available for you to read in detail.

This review claims that AmoLatina.com is a total scam. Then it goes onto say that the "positive reviews are spam that are written by the employees of the company". He goes on to say that the one of the reviewers "apparently is from Australia however his fluency in English is terrible". We have witnessed ourselves reading countless online reviews that claim that the site is fabulous. If you look at the general overall theme of the positive reviews it looks like it's written by the same people, with the same thought process. However we cannot prove that the site is actually writing those positive reviews but you have to ask yourself who has the most to gain from positive reviews, of course is going to be the dating site. So please understand that this site can falsify reviews to put the web site is a positive light to drain out the negative reviews.

Other reviews that seem honest and legitimate:

There are hundreds and hundreds of positive reviews discussing AmoLatina.com. But are they real? From our experience and what we see in the situation we are highly skeptical that these are real reviews from legitimate members of the site. Dating sites can easily hire online reputation management companies that are paid in order to enhance your online reputation, this includes creating positive online reviews and positive YouTube videos etc. All of this is done to silence the negative search engine results and show your company in a positive light. This is what could be happening.

A regular type dating membership is based on a monthly charge of roughly $30 per month. AmoLatina.com operates on a credit based system. As you can see from the evidence below 1000 credits will cost you $399.00. If you break this down according to email, you are able to send or read 100 emails only for $399.00. Now if you calculate how much it cost to send or read an email it's $3.99. This makes it very lucrative for the dating site to operate on a credit based system. Basically the more you interact with people on the site the more money the website makes. Unlike other dating sites that charge you a flat rate of roughly $30 per month where you can send and receive as many emails as you like.

We suggest that you use extreme caution if you plan on purchasing credits on this site. Realistically you have no clue who you are really interacting with. Just because you see a photo of a beautiful Latina girl, is that who you are chatting with? Some of the online reviews that we have read have said that the photographs are actually have paid models. So we really have no way to identify if these are legitimate members of the site or if the photograph have been purchased and then use to create a profile. Yes you are interacting with real people, but are they even female? This is one of the major problems with this site and spending $400 in order purchase a credit package is very expensive. The choice is yours but please watch out.